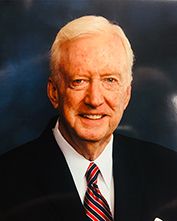 James Huffman grew up in Chicago and first came to Colorado to attend the University of Denver for his undergraduate degree.  After college, he entered active duty with the United States Navy, where he was commissioned as an officer and then sent to Vietnam.  Upon returning, he taught for the Navy and worked on a Masters Degree at Georgia State University.

Following six years of active duty, James transitioned into the Naval Reserve, where he held many jobs.  Included were serving as Commanding Officer of three large units and working at the Embassy in London with NATO and the Commander-in-Chief of U.S. Naval Forces, Europe.  He went on to attend the Naval War College and the Navy Post Graduate School.

James was also selected to serve on the committee, which organized Liberty Weekend and The International Naval Review for President Reagan in 1986.  In addition, he was knighted by the Sovereign Military Order of the Temple of Jerusalem, the world's oldest military order.  In all, James served for thirty-one years with the Navy until retirement as a Captain, earning some eleven medals, including the Navy Commendation Medal and the Meritorious Service Award.

Beside his military career, James spent time in both the communications and oil businesses.  He was the Development Director for an international youth organization, followed by President/Executive Director of a national foundation, which provides college housing on campuses around the country.

Now retired, James consults and serves on several boards, including a world-wide air charter company, a regional airport, the Screen Actors Guild and the Douglas County Community Foundation.  As an Airline Transport Pilot and Flight Instructor, he continues to fly on a weekly basis.  He also drives and conducts tours of Colorado in large luxury motor coaches and does occasional television acting jobs, in between tennis matches and golf outings.